When using the thin client on Seedboxes, we need a way of knowing if the finished torrent data has been downloaded to our local machines, and moved to another folder to keep the "completed" folder tidy when accessing with FTP... Then it can sit there seeding... Vital for private trackers.

As almost all seedboxes will be used in this manner, torrents downloading, completed and locally downloaded, Deluge could make this workflow slick.


An obvious possible method is an optional column to add that has a tick-box.
When the user has finished FTPing the file down, they could tick the box on the torrent's row and it would trigger to deluge to move the torrent files from the 'completed' folder to the users 'downloaded' folder. Done in one click.

The move could be optional, as some users might only want the locally downloaded status, but not the move.
The downloaded state is included in the existing 'States' in the GUI, so that the user could filter which torrents have/haven't been locally downloaded yet.
This feature probably doesn't have any use on a local installation, only on the thin client/seedboxes, so the column say, would be enabled for thin client/seedbox use then unticking 'Classic Mode'.
Top

How are others dealing with this currently?
How do you deal with locally downloaded torrents you want to keep seeding?
Top

Not using things this way, I simply share the folder where all the torrents reside (well ordered by folder etc). Plex could be a solution to stream the content of your seedbox to your local computer w/o the need to transfer the files. Or if you have enough place on the seedbox you can use the "copy completed" plugin. For example download in a folderA, use the plugin to copy files to a folderB, and copy files of folderB to your local computer with a delete after the copy.
Top

I'm talking about the traditional, vanilla, standard usage of Seedboxes... Where all finished torrent files are downloaded locally to your HDDs, Media Server, etc.

How do others deal with the standard, traditional usage?
Top

Anyway, my Deluge downloads on a 2TB SSD, then after the download is complete, it gets moved to a storage pool: 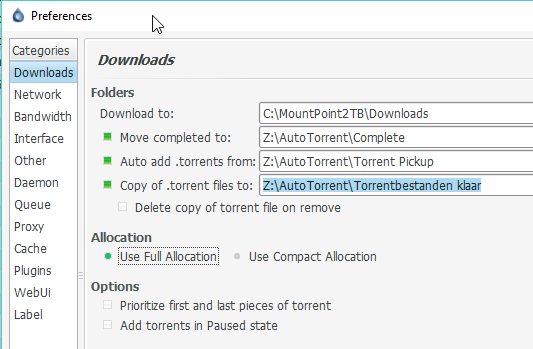 Are you using a seedbox? A server on the internet running deluge? Which we connect to from our local machine with the deluge thin client? That we have to use ftp the copy the torrent's data from the remote seedbox/server to our local machine?

Again then: When downloading the torrent's data, it's going into the 'Downloads' folder... Then it automatically gets moved to the 'complete' folder when the downloading reaches 100%...
Then you manually download the files from the seedbox with, say, FTP, down to your local machine, desktop, laptop, whatever...
...Then what do you do with the torrent's data, if you are going to keep seeding it? Do you leave it in the 'complete' folder??? Where it will 'litter' the folder such that you don't know what has/hasn't been downloaded when you next login with ftp???

Currently, i manually 'Move Storage' to another folder, such that when i login with ftp, i know that every file in the 'complete' folder is to be downloaded, or resumed...

The moved torrent's data in my 'downloaded' folder happily sits out of sight, while the torrent seeds forever more, or to honour the ratio or time demands of the private tracker its from.

How do other people do the manually moving the storage bit after ftping?

I'd love there to be feature such that it took one-click to 'Move Storage' the torrent into the predefined folder for continued seeding...

This feature is specific seedboxes.
And to torrents that are kept seeding after the data has been copied to the local machine from the seedbox server.
Top
Post Reply
6 posts • Page 1 of 1

Users browsing this forum: No registered users and 3 guests