Why seeders show 0 in Deluge but not in other clients?

Why seeders show 0 in Deluge but not in other clients?

If a torrent has a list of trackers, how does Deluge go through the tracker list? Does it try to connect to them all at the same time?

If a torrent has no trackers in it's list, how am I still seeding to a peer?

I have been migrating my torrent list from qBittorrent to Deluge (painstakingly one-by-one). I force-check then resume to make sure my torrents are seeding/working. I narrowed down my list to around 49 torrents which always show Seeders 0. I compared the same 49 torrents in qBittorent and qBittorent shows at least 1 seeder each. 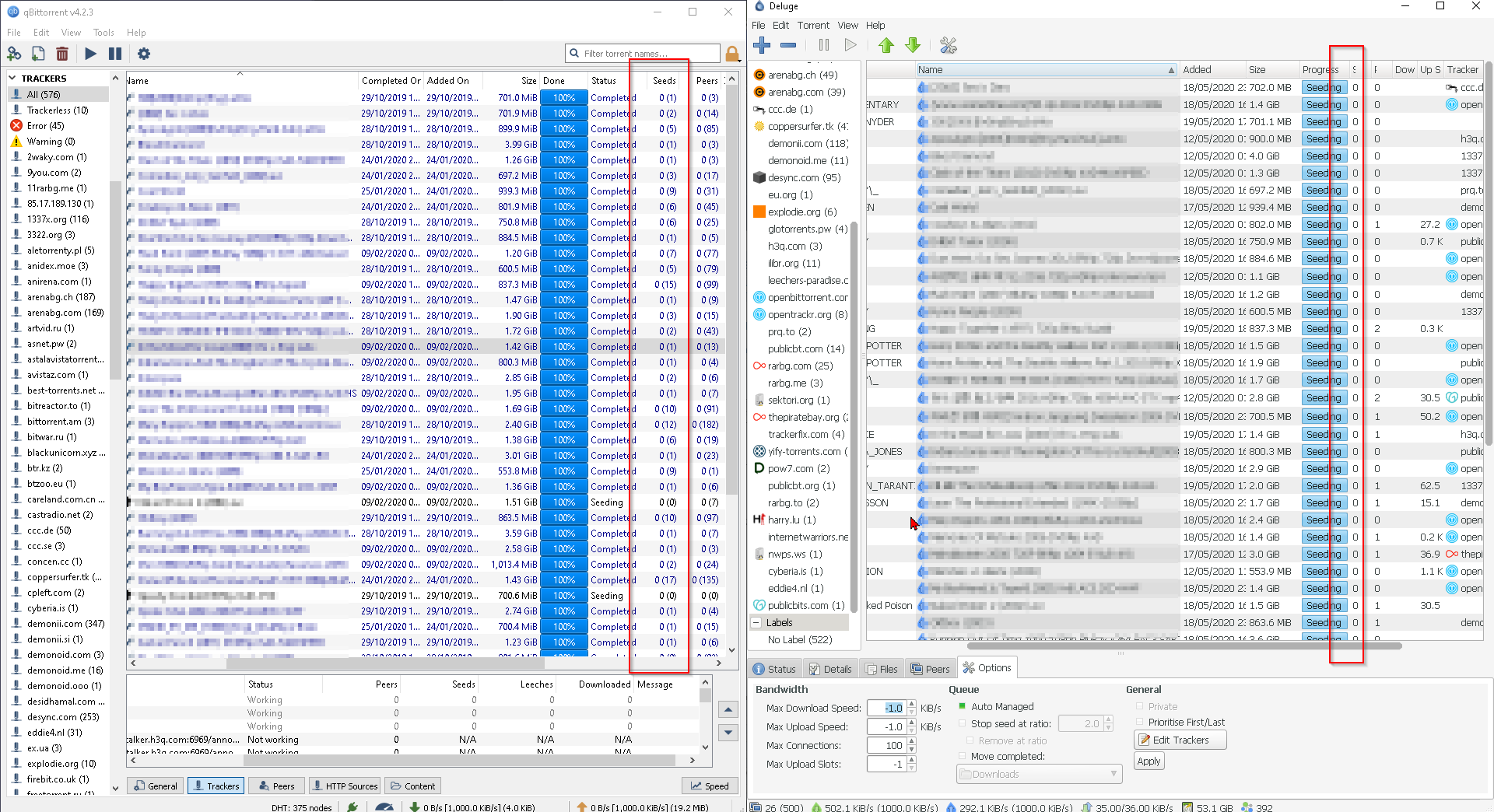 Note, the rest of my other torrents in Deluge seem fine, ie. showing >1 Seeders, etc.
It's just these mysterous 49 torrents which always show seeders 0 but in qBitttorrent they show >0.

Re: Why seeders show 0 in Deluge but not in other clients?

qBittorrent, I believe if remember right, have announce to all trackers enabled by default, which deluge doesn't. I made a feature request ticket about adding these two libtorrent related options to deluge several years ago, but no responce however. Luckilly you can use ltconfig plugin to enable this yourself i.e. announce_to_all_trackers and announce_to_all_tiers. By default, either the tiers or trackers from each tier is shuffled, cannot remember fully, and to lazy to lookup now, and then a tracker from a tier is announced too, and only if that fails, another tracker is used from next tier, but not others in same tier etc. If enabling the two options I mentioned previously, in ltconfig plugin, then even though the API docs for said options is little confusingly written imho, then I once asked Arvid and he stated he believed it would announce to all trackers from all tiers, when both enabled.

As your question of what's done if no trackers at all(or non-working ones), then the answer is DHT/PEX is used, if not private torrent that is, which disables DHT/PEX also even if enabled in options/GUIs.

Lastly, sometimes a tracker times out, as over-burdened or whatever, and other times not, and so back when I compared qbitorrent(-nox) and deluge, years ago, I noticed that, i.e. sometimes qbittorrent would have over 100 peers, and deluge only a few, and other times vise-versa, with a torrent I checked which had two trackers with one with many peers and another with only a few, and had announce_to_all_trackers/tiers enabled in both clients.
Top
Post Reply
2 posts • Page 1 of 1

Users browsing this forum: No registered users and 8 guests