This is my current situation, I am running freenas, with deluge inside a jail.
My expertise with unix is quite low, getting this to work took me quite a while

My problem, so when I restart my jail, it will start the deluged and deluge_web services.
From an external computer I am then able to access the deluge running on the server via an account I made for GTK access ( is it called like that? idk).
Now I try to access it via browser and a connection menu pops up with the local daemon, when I try to start this it doesn't work.

Comparing this to my windows deluge experience, this is different. Once I enter the webdeluge of a windows client it automatically shows me my torrents. But I don't know if this is important.

Now when I SSH into my jail and stop the deluged service, I am able to start the localhost daemon and see my server's deluge.

I can't seem to get it work to work side by side. The goal is to have remote client access and also webgui access.

Thanks in advance!
Top

Now I try to access it via browser and a connection menu pops up with the local daemon, when I try to start this it doesn't work.

In the web interface, under connection manager, what does it say under "Status"? Did you try just clicking "Connect" on your host?

Can you maybe give us a screenshot of the web interface, with the the connection manager open?

Also are you running deluged and deluge-web in the same jail?
Top

Yes they run in the same jail.
I just did pkg install deluge-cli,
i created an user deluge with group deluge, and used this user as user of deluge. I guess this holds for both deluged and deluge_web.
Is this a problem? Do note that I changed the port the deluged daemon listens to something different as standard, I thought this possibly clashed with the "local" web daemon.

What you can see it the connection manager, once you do 'service deluged stop', clicking on start daemon works and starts it and makes you able to connect. However, in the picture this has not been done yet, and clicking on start daemon does nothing, leaving you unable to connect to anything. I hoped that adding the deluged daemon would be a solution, however this doesn't work. 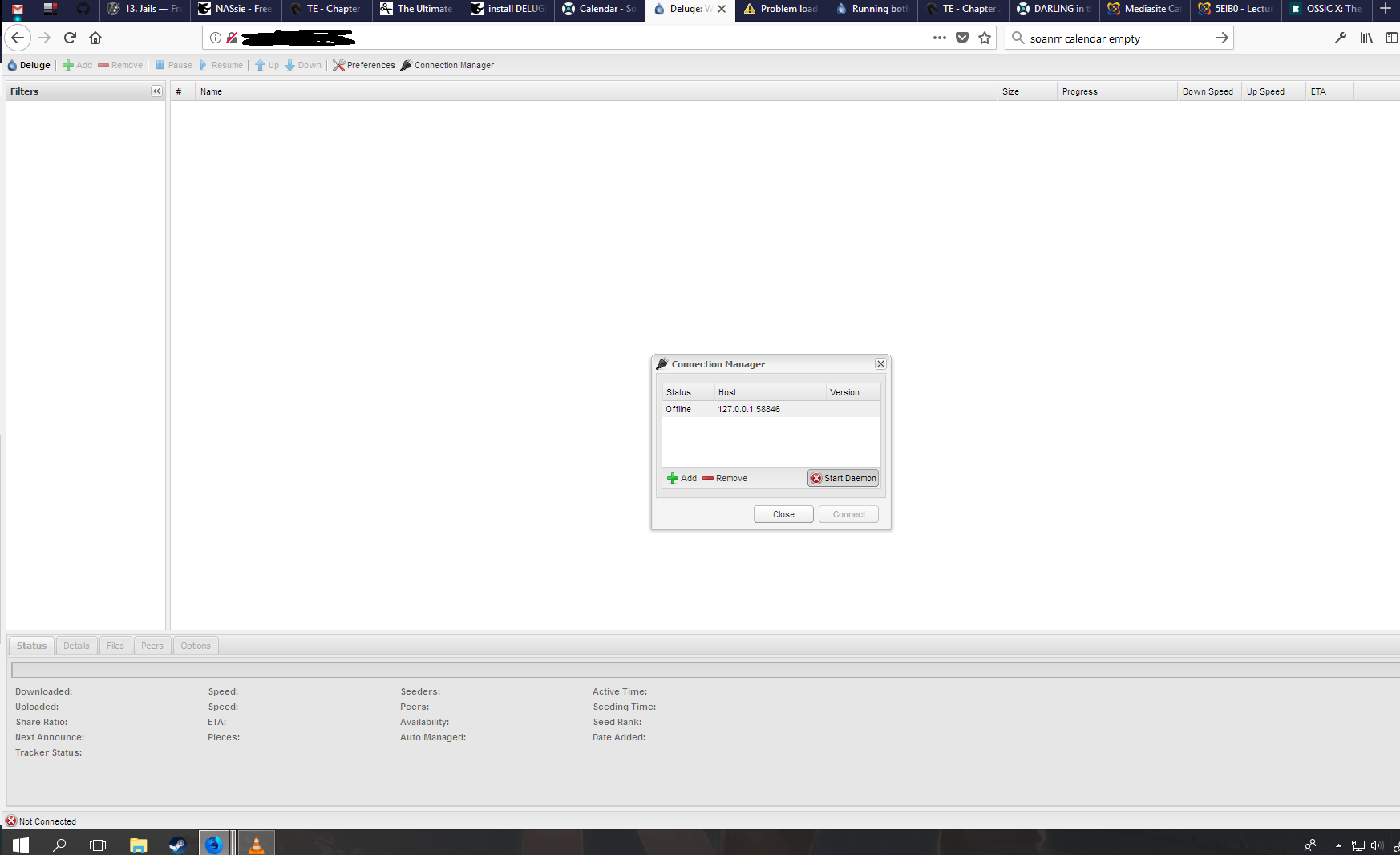 Perhaps you are having problems, because you keep trying to start daemon from the web interface, instead of clicking the big (shiny) connect button?
Most of the suggestions below are simply steps to get you back to default settings

Restart jail
Open gtkui on your windows10 host, connect to deluged in your jail.
Go to Preferences and check that under "Plugins" WebUI is NOT checked. If checked, remove the checkbox.
Go to Preferences and under Daemon change the Daemon port back to default 58846.
You will lose the connection from your gtkui client to deluged on freenas jail.
Restart jail.
Open Connection manager in your gtkui client. Click Add and enter freenas jail ip, username and password for deluged. You don't even have to connect, as the light will turn green and under version you will see 1.3.15.
You can remove the old entry in gtkui clients Connection Manager
Open web-browser on your w10 host and open the web interface on your jail (default jail-ip:8112). Login with the password for deluge-web.
Open "Connection Manager" and click on "Add"
Under Host enter: 127.0.0.1
Under port enter the port that deluged is listening on=58846.
If under status you now see "Online", click on host and then click Connect.
Done.

P.S.
If you don't see Stauts:Online, open "Connection Manager" and click on "Add" again, but this time:
Host 127.0.0.1, port 58846, username: "your username for deluged", password:"your password for deluged"
Deluged allows clients that are running on the same host and under the same user/settings to connect without user/pass.
In your case, deluged and deluge-web are running in the same jail and under the same user, so unless you removed the localhost:yyxxzz:10 line from auth, deluge-web can connect to deluged without user:pass.


I'm gonna write some simplified deluge stuff below (which you probably already know), so forgive me if it comes off arrogant/boring.
Also you don't have to read it.

Deluge is made of:
Deluge Daemon: does everything and allows clients to connect and manage it. All the "torrenting" happens here.
-It is mostly called deluged
-It talks to clients on port 58846 (default port)
-It talks to peers and trackers and does bittorrent stuff on port 6881 (default port) but we don't care about that right now.

Deluge Clients: They connect to deluged and manage it. With a client, you can add/remove torrents from deluged, change some deluged setting, etc.
-Clients can connect to deluged from anywhere (over the network).
-One client is a gui client, also called gtkui. You have that working and it connects from your pc to deluged.
-It has it's own settings (gtkui/preferences/Interface)
-There are other clients, like deluge-console but we don't care right now.

Deluge Web Interface:
-It's mostly called deluge-web
-It can run on the same machine/host/jail as deluged or on a different host.
-It's just another client. As long as it knows where deluged is (ip address) and what port it is running on, it can connect.
-It has it's own settings (web interface/preferences/Interface)

P.P.S.
Sorry for spamming this wall of text instead of just helping, but I had 30 minuts to kill

Reading your text helped me a lot, I realized that the standard setting of the webclient does not reflect the change I made in the daemon port.

I just added another connection which was 127.0.0.1:[newportnum] and now I am able to connect to it just fine

There is one more issue, I want deluge_web to listen to another port than 8112, however changing it in the web.conf file doesn't work. Where should I change this? It keeps reverting back to 8112, after restarting the jail.

Thanks for the help!

p.s. I called it deluge_web, since that is the actual name of the file. In ALL guides on the internet they speak of to enable deluge-web do the following command:

, which does not work. Took me a couple of hours to figure out why I couldn't start the service.
Given that the name of the actual file is deluge_web the correct command is:

runeazn wrote:There is one more issue, I want deluge_web to listen to another port than 8112, however changing it in the web.conf file doesn't work. Where should I change this? It keeps reverting back to 8112, after restarting the jail.

deluge-web has to be first be stopped, before you can edit web.conf (and for changes to take effect).
Or you can change it in the web interface (deluge-web/preferences/interface). Easier imho.

deluge-web turning in to deluge_web is probably a bsd init trick or a package manager (pkg) typo? I'm pretty sure deluge_web is just the name freebsd gives to the service file (service file has the auto start stuff in, so when your jail comes up, deluged and deluge_web start automatically)?
Top
Post Reply
6 posts • Page 1 of 1

Users browsing this forum: No registered users and 15 guests