You are the 7th best thing that ever happened to me. Thank you!
Top

I've found a weird visual glitch, but I'm not sure if it's specific to these builds (although I've seen it in previous dev builds)

cakeforcat wrote: ↑Mon Feb 07, 2022 11:14 pm I've found a weird visual glitch, but I'm not sure if it's specific to these builds (although I've seen it in previous dev builds)

yes i have this problem, cas had told me it was due to change GTK3 and with the way the cell caching is implemented.
Top

Awesome to see all this dev-action, thanks alot all

Not important, but can save little time when building gtk, and have it(gtk)20mb smaller, by using 'gtk3 adwaita-icon-theme hicolor-icon-theme pycairo pygobject'(no '--skip' needed then, as was only referencing gtk3-full added elements), this just omits 'enchant' and 'wing' btw, from what you use(doadin/upstream). Also, don't need an extra recourse step for finding libtorrent.pyd if adding 'stage_module'' arg to b2(placed in current dir). Last, just to correct something I previously said, was that my notion of only needing two components defined(vc.tools.x86.x64/windows10sdk) when installing msvc, was because I use msvc-buildtools, whereas didn't even notice doadin using comunity-edition, which makes a diff e.g msbuild specifically need defined upon latter etc(many of doadin's defined deps are from msbuild btw, didnt cross-check though) . Think still is that typo previously mentioned too(Get-Childitem if remember correct), but don't know much about it honestly as never ran script fully, and not in long time neither. As said, not important(hopefully not long, and with nice CI setups and all), atleast mostly, and just little commenting

Thanks for all your work doadin again.

Edit: Also, for libtorrent I'd use 'optimize=speed'(instead of 'space') and "lto=on"(thanks petersasi). Additionally, as Arvid mentions hashing is one of the biggest culprits in high-speed torrenting, then i'd not just copy over the python built openssl for libtorrent to use, but instead build myself, because otherwise has asm-off defined, which I've seen mentioned yielding 10-15% degradation in performance roughly(openssl performance), and then can likewise enable LTO(WPO), just need do through cflags/ldflags here. BTW, I previously stated the two dll's included with python was from pyopenssl, which was wrong sorry, and was from 'ssl' module, which I thought was named pyopenssl, sorry. Last, checkboxes in nsis-script for dark-mode(fileopen/filewrite/fileclose settings.ini) and for disabling max-path(reg+exe-manifest - maybe pyinstaller already does manifest, never checked), like qbittorrent etc. would be cool imho - likewise maybe even one for libtorrent v2.x instead of v1.2.x possibly(or as radioboxes). Just a thought, though of-course for later, and not now, I obviously understand.
Top

cakeforcat wrote: ↑Tue Feb 01, 2022 4:25 pm @doadin
Installed 2.1.0.dev59 with libtorrent 2.0.5 x64 on Windows 11 and after a simple .NET update (KB5009469) windows defender starts marking deluge as a trojan? First time something like this happened with the dev builds for me (I've been checking them out since the last successful clean build here) 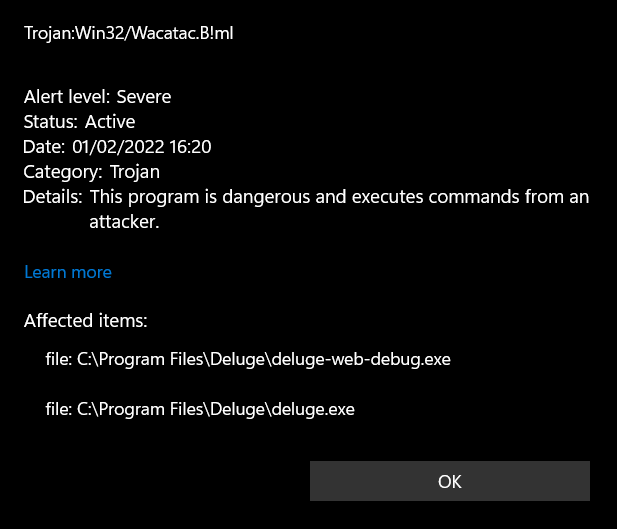 EDIT
After allowing the threat deluge now crashes with a trace: 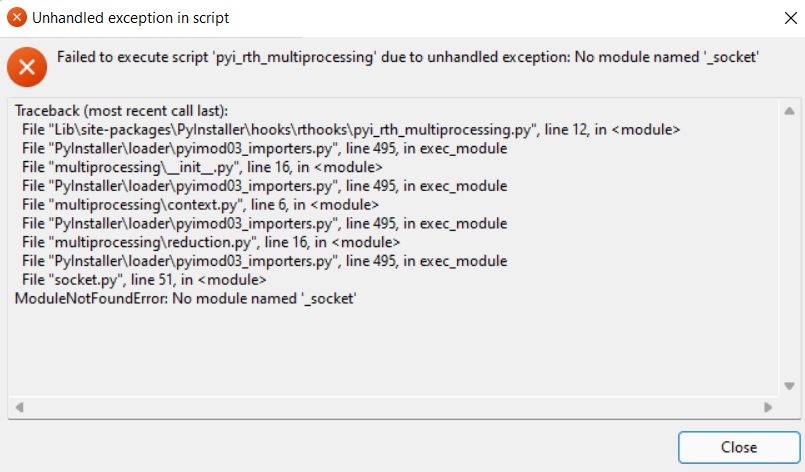 Did a quick reinstall, but I feel like this may be related to libtorrent as deluge starts with a port issue, then fixes itself. Now I get a "Potentially unwanted app" warning sometimes(?) when I launch, but it disappears quickly

It happens sometimes not sure why, its all built from sources that use github actions to build so, really not sure whats triggering that. It might have deleted something before you allowed might need to re download.
Top

There builds have some changes from PRs on github that fixes a few things.
Top

Is it possible to use any of the dark themes for these builds or is there not support yet?
Top

Built-in gtk ones work but thats all I know. Sorry, never used themes before, I don't see why they would not work though.
Top

Any progress on the builds becoming official?
Top

There builds have some changes from PRs on github that fixes a few things.