I just checked sources and yeah it's possible - First with deluge closed you need delete 'gtk3ui_state' folder under your deluge profile-folder, as that takes precedense over changes in the source-files. Then in 'Lib\site-packages\deluge\ui\gtk3\torrentdetails.py', you replace line 125 with 123. This then starts up with 4'th tab, the 'Files' tab highlighted/opened always. If instead wanting that tab at position number one instead of 4'th, and still opened by default, then additionally replace line 136 with 133 in same file - backup the file first i'd suggest so not having to reinstall if screwing up.
Top

mhertz wrote:I just checked sources and yeah it's possible - First with deluge closed you need delete 'gtk3ui_state' folder under your deluge profile-folder, as that takes precedense over changes in the source-files. Then in 'Lib\site-packages\deluge\ui\gtk3\torrentdetails.py', you replace line 125 with 123. This then starts up with 4'th tab, the 'Files' tab highlighted/opened always. If instead wanting that tab at position number one instead of 4'th, and still opened by default, then additionally replace line 136 with 133 in same file - backup the file first i'd suggest so not having to reinstall if screwing up.

Made my arragements in the interface erased and renew. (width and order)

...but the great new is while having rearranged it, it keeps the settings in memory after restart Deluge.

Thank you very much so. I keep it

To say, that request was because, in that tab, it is possible to exectute the downloaded file by double clicking so, thats the only tab i use at the moment...
Top

Sorry, forgot think about that I.e that you'd loose arrangements already made, and should have prefaced that with a warning of that atleast, sorry. You're welcome mate and good usefull mods you requested like this of having specific most used tab always open and older request of always deleting file plus data, to have listed instructions for others.

@all, next build I think I will hardcode the vertical tabs mod, e.g so not having those annoying arrows showing and needing several extra clicks when the custom height resets at times for some reason - if having objections to this then please speak up with argument against, but will think little more about it too. I think I also replace the non-standard close and maximize buttons at top-right of mantis-dark theme, for people not using gtk_csd=0, I can not make them 100% perfect, but atleast better and less "sticking out like a sore thumb" or what the hell that saying goes lol, pretty sure not got that right(throat instead of thumb? No, not that either I'm sure, but to lazy to google it now honestly) , but not my native language this

I cannot fix the default theme's win7 style buttons, as gotten not from png's which I can replace with png's from some windows 10 mimicking theme, but comes from a dll windows system file which unfortunately has outdated icons inside.
Top

Small not important info - On my end(unreleased) I have changed the buttons to standard win10 ones in mantis-dark theme, and finally succeded also in the default used win32 theme. The only thing is that the buttons doesn't "light-up" or whatever called, when hovering mouse over the buttons, and for the default theme, the top titlebar is black, which I don't know if is okay, and for these two reasons, i.e. not lighting-up on hovering over them and black color of top-bar is reason i'm in doubt if I should change the win32 default theme to this or not - I will for sure change the mantis-dark theme over, as better than before imho, where had non-standard red buttons from some strange linux theme where originally originates from, but for the standard win32 theme i'm unsure.

Maybe I can change the color for top-bar, but not sure, as really noob at this CSS editing stuff(there's a million color fields with hex-codes inside lines with cryptic names), and was lucky I could even change the buttons, as tried many times before and always failed, and lets say I can, then don't know what color to choose either, e.g. grey, white or whatever.

Here's two pics, one is the standard win32 theme with the win7 buttons on win10, and next is the change I just made to get win10 buttons and gets black top-bar also - I changed to show horizontal tabs for bottom-tabs also for both pics btw.

Anyway, if selecting gtk_csd=0 in installer, then all this is irrelevant for you and you get native bars/buttons anyway, but as I have disabled that option by default because of performance complaints with it, from other gtk3 windows projects, though still not sure if affects deluge or not, so just in case and hence these modifications and thoughts. 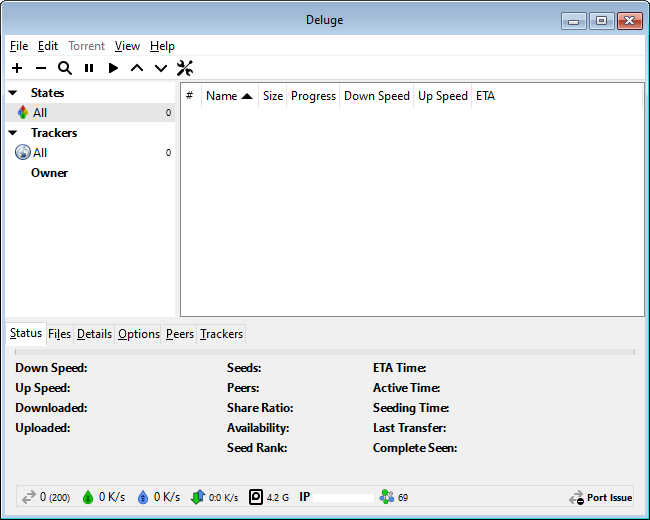 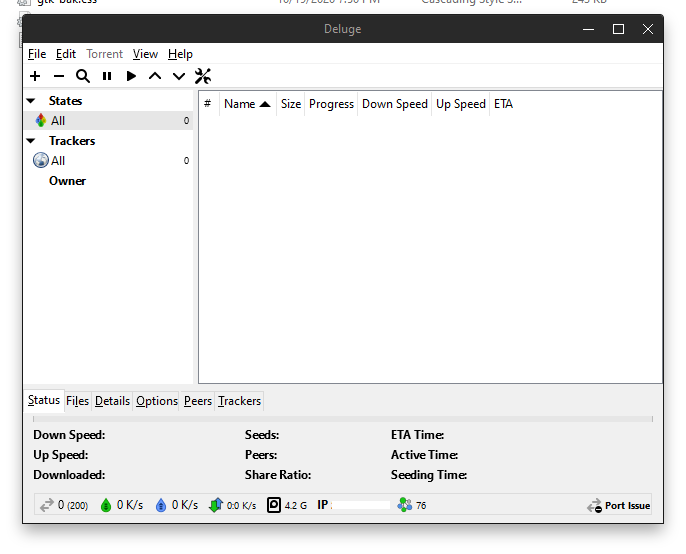 Hi, I was managed to run Deluge 2.0 after several tries, but I could not find Connection Manager at all. Is it not included? My setup with 1.3 was - I was running daemon on Ubuntu server and connected to it from my Windows desktop via Deluge client (not web) . I stopped my local daemon and every time I started Deluge, Connection Manager window popped up . In 2.0 I cannot find it anymore. Is it known limitation?
Top

It should be the same as deluge1, and you need enable thinclient-mode, instead of the default classic-mode, in the preferences dialog.
Top

Yep! Thanks for this tip - I totally forgot how I set it up for Deluge 1.
It seems that I can start GUI only if Run As Admin. Otherwise nothing happens. Is it how it is supposed to be?
Top

Hi,
I have an HTPC running windows 10. It's configured to 300% zoom (settings/system/display/scale&layout)
Some elements are not well shown. window bar / check boxes / scroll bar, etc.

@godd, I've not seen this on a clean win10 VM, latest build fully updated, everything default pretty much, and neither on real win10 machine of family-member, but this has been reported once before recently though, so something is going on for some apparently - the last reporter had just applied some windows updates which included some optional new features/settings which he accepted. Today there where posted an article I found, stating some win10 users experiencing pecilour issue of running exe's to be not possible anymore and with several tips reported working, e.g try run with other user account, like you did with the run as admin workaround. https://thegeekpage.com/fix-exe-files-n ... indows-10/ Could also be blocked because a downloaded file, which if that, then you can right-click it, select properties and click on unblock - I remember that happening for a relative many years ago, where utorrent suddently wouldn't start and no message about it and after googling the issue I found that solution.

@snamds, Sorry, I don't know honestly and can only suggest maybe try install with other theme during install, but don't know if will help or how much.
Top

Additionally, then for the dev-release only, then as slow progress currently then I added some pull-requests from deluge's github repo(i've done so before too, when important, but more of them I mean):

Now supports IPv6 and setup by default to that(like deluge1 or if using libtorrent v1.1.x, and so now works also with libtorrent 1.2.x which is default - this previous issue was because of a change in libtorrent 1.2.x and how deluge bound it's listen-address), supporting adding several interfaces/IPs comma seperated for binding network in/out, note IPv6 binding should be added without brackets as is added later behind scenes, and also support for binding your VPN device name instead of the ever-changing VPN IP(so like qbittorrent etc) - that(interface-name) should be entered as a GUID with curly-braces and in uppercase, and can be found by running this command in elevated cmd-prompt 'net start dot3svc & netsh lan show interfaces & net stop dot3svc'(remember to uppercase the letters afterwards, as listed there in lowercase and that won't work! Also restart deluge afterwards too). Thanks Strangelovian! (I have to make some tests regarding second part of his PR, regarding IPv6 support of geoIP, as changed to other geoip backend some time ago, so that will have to wait for now)

Changed the minimum share-ratio to '0.0' in GTKUI as that is likewise supported already in webUI and consoleUI. You still upload during downloading regardless btw, so it's not disabling uploading completely, and most clients supports this also, plus the other deluge UIs as said, so just to keep the consistency. Thanks Yuri Sevatz!

I could add above dev-changes to stable deluge too, but thought to better leave that as vanilla as possible e.g wasent sure either if should fix notifications plugin there also etc, but decided to, as also had fixed execute plugin there too, with scudre's PR recently and other important stuff previously. Actually also thought about making third installer with non-merged changes, and probably better idea honestly, but for now just did it like this.

Users browsing this forum: No registered users and 2 guests